While most of the cast making up the handsome men of Goona were college students, Gerry Roselund was a bit older, having already served in the Marines from 1948 to 1952, and was working as a lifeguard in Miami Beach when he was cast in THE WILD WOMEN OF WONGO.

Born October 15, 1929, Gerald Osborne Roslund was a private first class in the Marine Corp and had his training at Parris Island. In 1950 he was stationed at Camp Pendelton attaining the rank of corporal. He married Shirley Morton (aka Shirley Grounds) on March 2, 1951 in San Diego, California.

As a member of the local Beach Patrol, Gerry won awards and had a few adventures. An issue of Stars and Stripes from June 24, 1959 mentions Gerry in a story about a shark sighting at Miami Beach. Gerry was the first to spot the shark, which was chasing a school of tarpon in shallow water. He and other lifeguards whistled an alert to bathers to get out of the water.

In 1965 he rescued a man caught in an undertow for which he received an award.

Another news story, this time from 1972, concerns a group of skinny-dipping protesters invading Flamingo Park’s swimming pool. “Word came down from City Hall there would be skinny dipping from 10pm on,” said Gerald Roslund (42), a beach patrol lifeguard for 19 years.

Roslund casually mingled with the nude swimmers, reminding them that soap was available in the locker rooms.

Asked about ground rules, he replied, “There are none. They’re here to have a good time and that’s it.“

Gerry Roslund died in Miami on May 6th, 1996. He was survived by his wife Betty and his son Gerald Jr.

Among the cast of THE WILD WOMEN OF WONGO are two actresses playing Wongo women whom I have been unable to identify. The lovely brunettes are Michelle LaMaack and Marie Goodhart, but which actress is which, remains a mystery.

The two mystery actresses of Wongo.

While I have been unable to find any information at all on Marie Goodhart, I have been able to dig up a little about Michelle LeMaack.

Michelle’s real name was Shirley Ann LaMaack. She was born on either April 15, 1936 or on September 1, 1937, possibly in Minnesota, and she later lived in New York. Her sister was Janice LaMaack Conklin (d. 2016), a real estate agent for Sotherby’s International Realty in New York.

Michelle (or Michele) married Robert Hector Minervini in August of 1957 in Palm Beach, Florida. They divorced in October of 1964.  She may later have been known as Michele Masieri.

If anyone has information on either Michelle LaMaack or Marie Goodhart, please let me know! 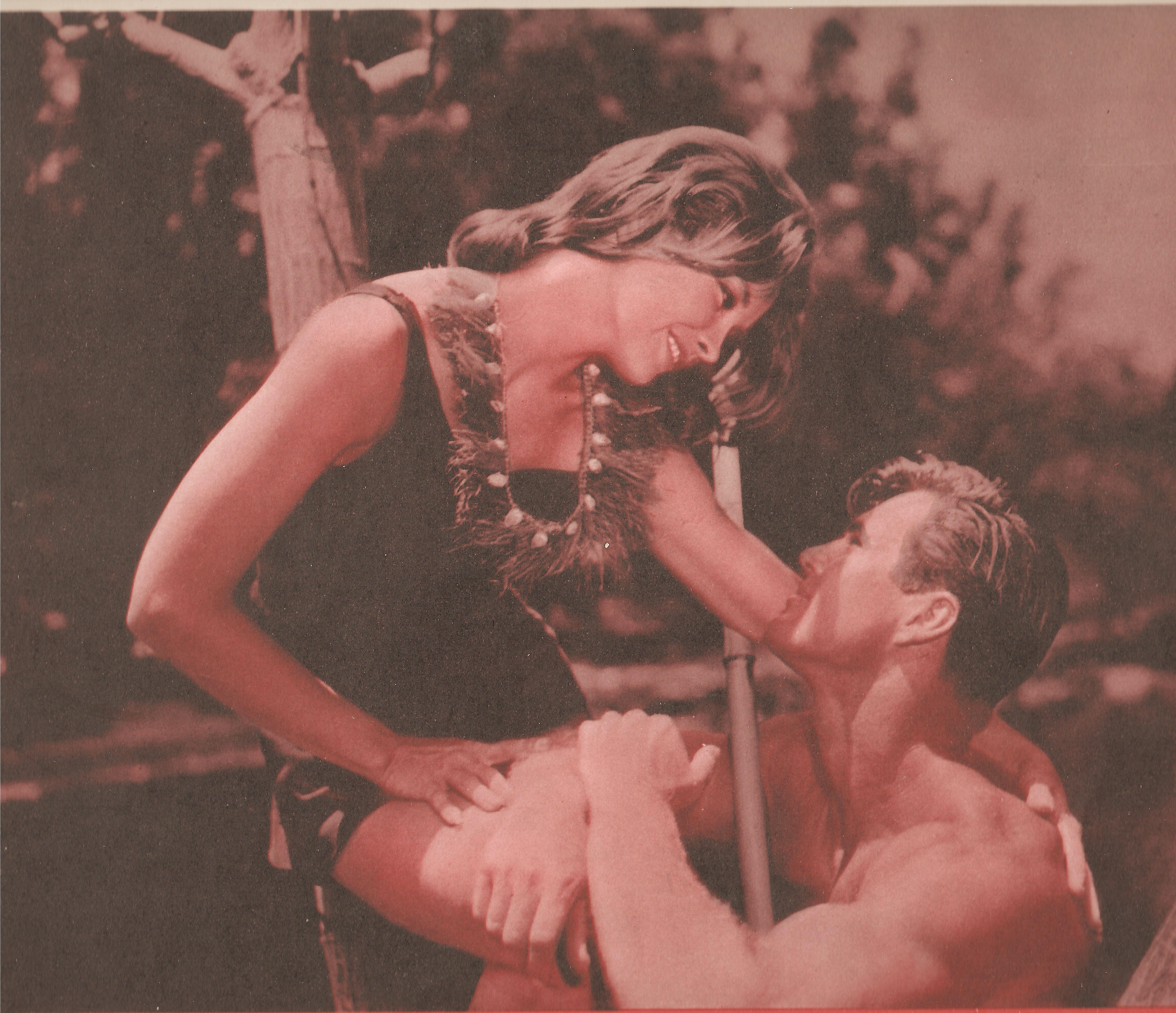 Val Phillips and Roy Murray in WILD WOMEN OF WONGO

Val Phillips and Roy Murray in WILD WOMEN OF WONGO

Lillian Malek was born December 11, 1935 in West Palm Beach, Florida, the daughter of Joseph Malek and the former Margaret Katz. According to the 1940 census the family included older siblings Jack (Joseph), Irene, and Eugene.

Lillian is the last girl on the right in the middle row of students in this Miami Beach High School photo from her sophomore year.

Lillian graduated from Miami Beach High School in 1954 where she was involved with choir and intramurals, and was in the senior class play as well as being an assistant in the main office. Her yearbook quote was “Profound sincerity is the basis for talent” and her ambition at the time was to direct and produce television plays.

Lillian’s photo from the University of Miami yearbook.

After high school she attended the University of Miami, graduating with a degree in drama. She was a  member of the Drama Guild and appeared on stage in the university’s productions of SKIN OF OUR TEETH and SCHOOL FOR WIVES. In both the 1958 and 1960 Miami Beach city directories, Lillian was listed as a ‘student’ and she lived with her widowed mother at 1561 Lenox Ave. Apt. 1. Her mother passed away on May 8, 1960. 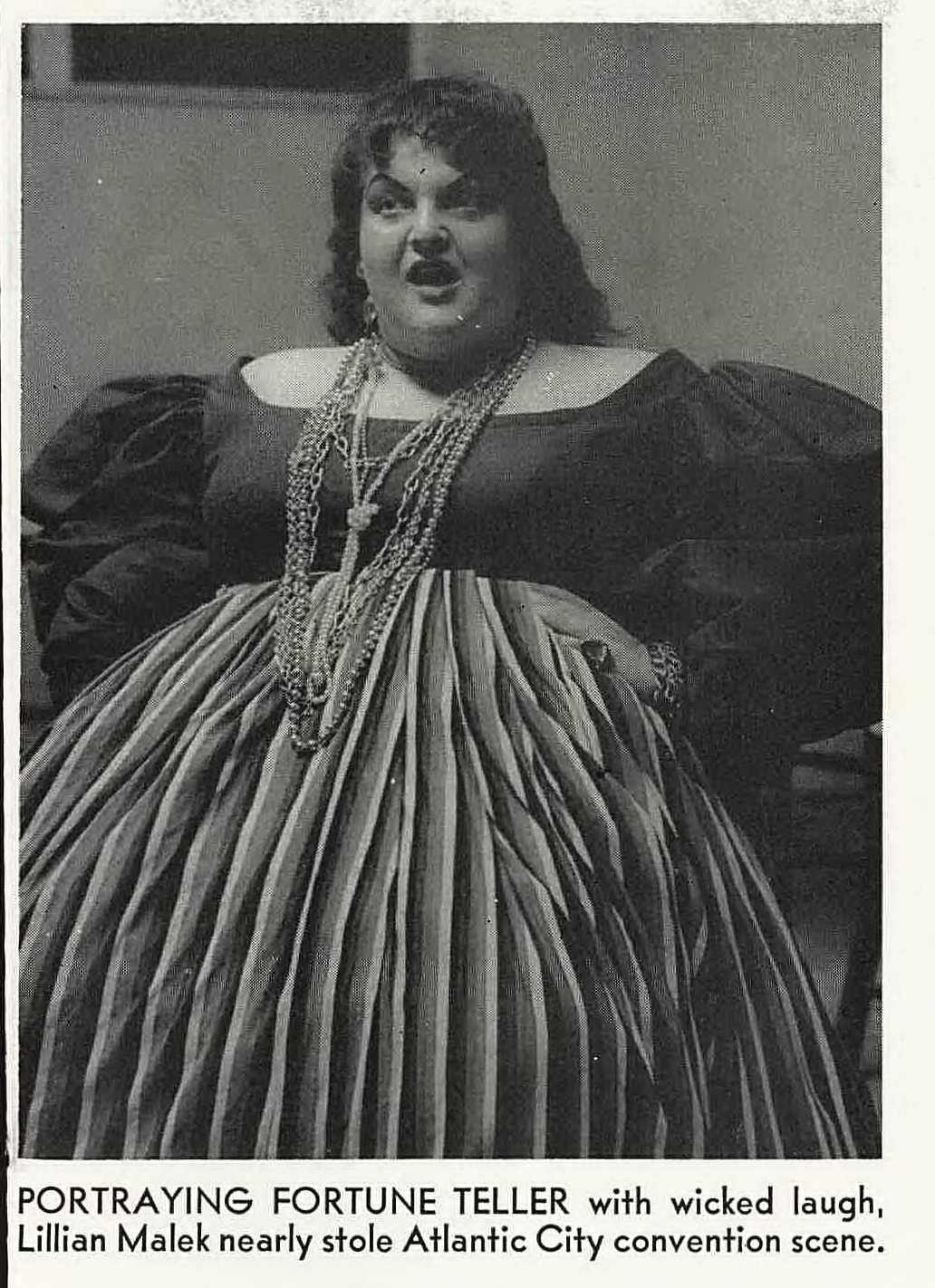 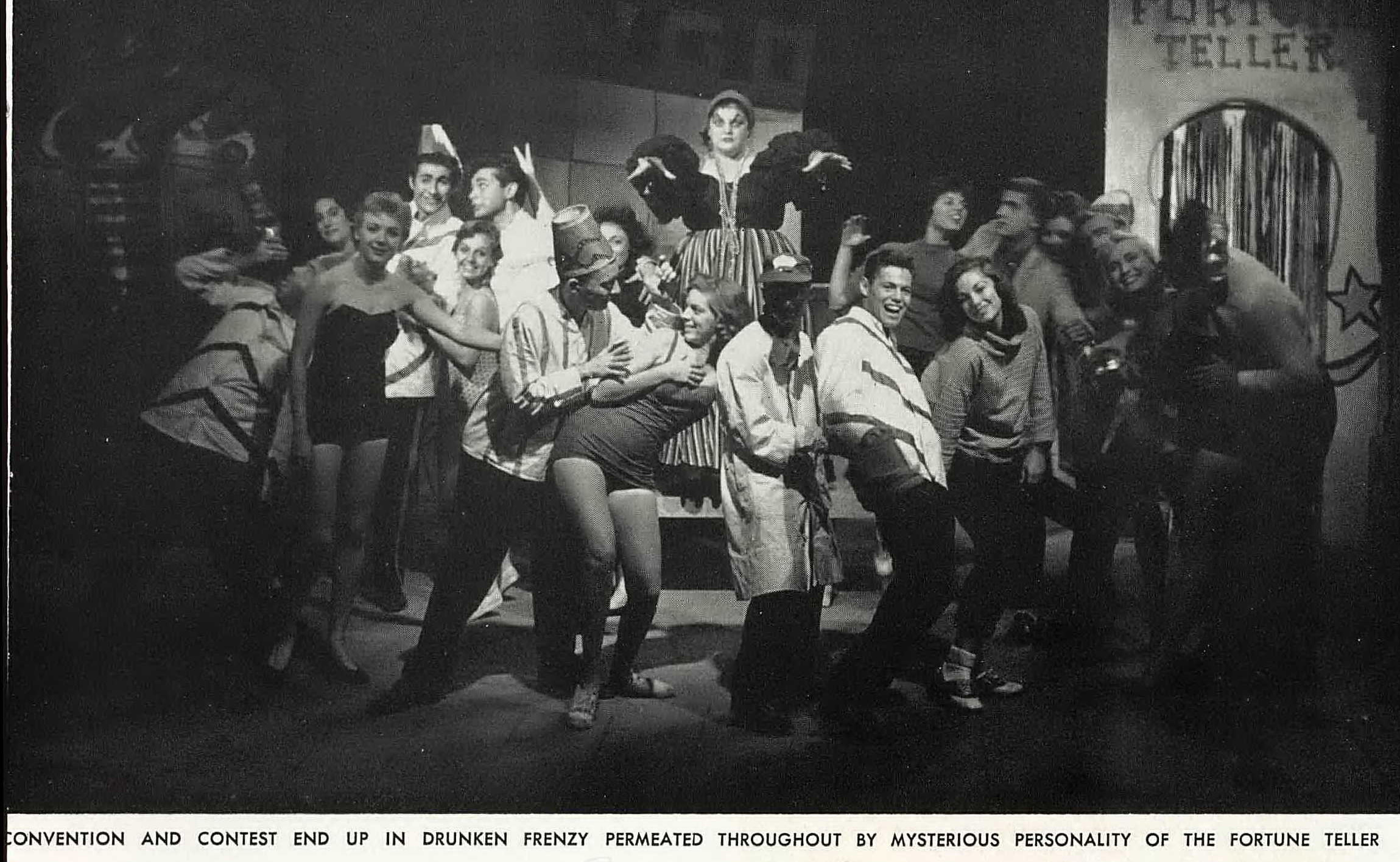 Lillian (center) in the University of Miami’s production of SKIN OF OUR TEETH.

Lillian, who plays a woman of the Goona tribe in THE WILD WOMEN OF WONGO, was one of several University of Miami students recruited to appear in the picture. She would go on to act in at least two other Florida based feature films: PAGAN ISLAND (1961) and ONCE UPON A COFFEE HOUSE (1965), both in “blink-and-you’ll-miss-it roles.

PAGAN ISLAND is a rather mild “nudie cutie” written, produced, and directed by Barry Mahon, a prolific east coast B-grade film-maker responsible for movies such as CUBAN REBEL GIRLS (1959), MORALS SQUAD (1960), BUNNY YEAGER’S NUDE CAMERA (1963), THE BEAST THAT KILLED WOMEN (1965), HOT SKIN, COLD CASH (1965), and FANNY HILL MEETS DR. EROTICO (1969), as well as kiddie fare like THE WONDERFUL LAND OF OZ (1969),  SANTA AND THE THREE BEARS (1970), JACK AND THE BEANSTALK (1970) and SANTA’S CHRISTMAS ELF (1971). Lillian appears as comedy relief in a scene where panic sets in when a man (Eddie Drew) shows up on an island populated entirely by women. When I spoke to famed pin-up photographer Bunny Yeager back in 2004 (Bunny was in charge of casting for PAGAN ISLAND) she remembered hiring Lillian for this film. 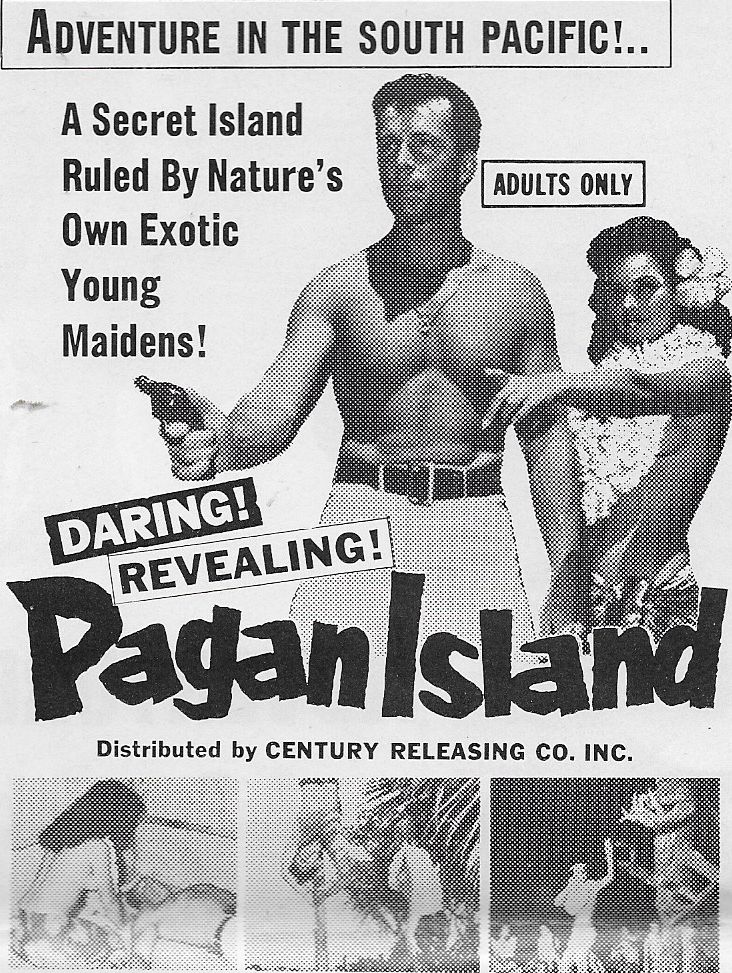 Although her role in the folk musical ONCE UPON A COFFEE HOUSE (aka: HOOTENANY A GO-GO) is also very small, it is likely that some of her scenes had been cut. In the end credits Lillian’s character is listed as “Mama Angellina,” and two characters reveal near the beginning of the film that they owe “Mama” four month’s rent on the coffee house. It is never explained who “Mama” is and she is never mentioned again in the film. Lillian appears towards the finale, briefly in the kitchen of  the coffee house with Pepe (Pedro Roman), and then during a pizza pie fight, but there is no mention that she is Mama Angellina. In fact there is no introduction of her character at all. She just suddenly appears for a few seconds and then her character is never seen again. ONCE UPON A COFFEE HOUSE is notable as being the film debut of comedian Joan Rivers who at that  time was part of a comedy trio billed as Jim, Jake and Joan. The film also features lovely Deanna Lund who went on to star in Irwin Allen’s popular 1960S sci-fi series LAND OF THE GIANTS.

Lillian worked frequently on the local stage. At Miami’s Coconut Grove Playhouse she was seen in BYE BYE BIRDIE with Russell Nype, ON THE TOWN with Peggy Cass, REDHEAD with Gretchen Wyler, and AUNTIE MAME with Gypsy Rose Lee. She also appeared in stage productions outside of Florida. In August, 1964 she played Florence Graves in THE HAPPIEST YEARS with David Nelson and June Blair at The Little Theatre on the the Square in Sullivan, Illinois. The following month she was seen in the same theater’s production of COME BLOW YOUR HORN which featured popular television actor Jack Ging in the lead. She had appeared previously there in 1958 in PAJAMA GAME.

In 1961 Lillian toured with Julie Newmar in DAMN YANKEES, which also featured Murray Matheson, Harry Stockwell, Louise Kirtland, Lloyd Gough, and Barbara James. In 1963 she worked with Bert Parks when the Broadway production of THE MUSIC MAN played in Anaheim, California at the Melodyland Theatre. Eileen Christy, Marian Paroo, Betty Tesman, Robert Driscoll, and Norma Larkin were also in the cast.  One of her last stage productions was the musical-comedy SEVENTH AVENUE which was put on by the Temple Emanu-El Players in May of 1978. She also appeared in radio plays at station MCKR in the early 1960s, along with fellow Wongo actress Iris Rautenberg. 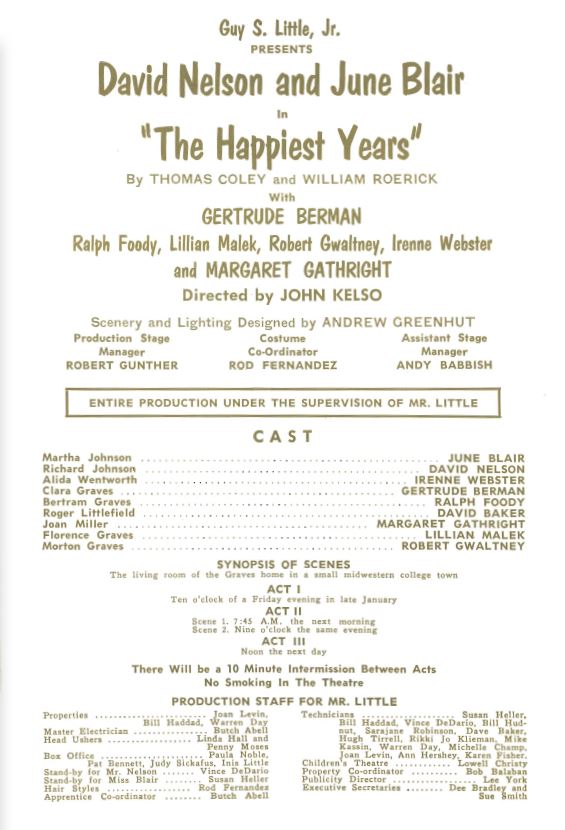 Along with stage and film work, Lillian was able to add television to her credits with appearances on THE RED SKELTON SHOW, THE JACKIE GLEASON SHOW and PRODUCER’S SHOWCASE.

Lillian was married twice. On November 14, 1964 she wed Istvan Szekeres in Dade County, Florida. Istavan was from Szeged, Hungary (born July 30, 1937) and had been living in the U.S. since 1961. He eventually became a naturalized citizen and changed his name to Steven Sands. He passed away in Miami, Florida on August 18, 2004. At some point Lillian and Steven parted ways and she married Abraham Eisner in Miami on May 20, 1973. As Lillian Eisner, she died on December 23, 1980 at age 46. At the time of her  death she was the activities director at the Miami Beach Jewish Home and Hospital for the Aged. She was survived by her husband Abraham, her step-son Michael and her three siblings. 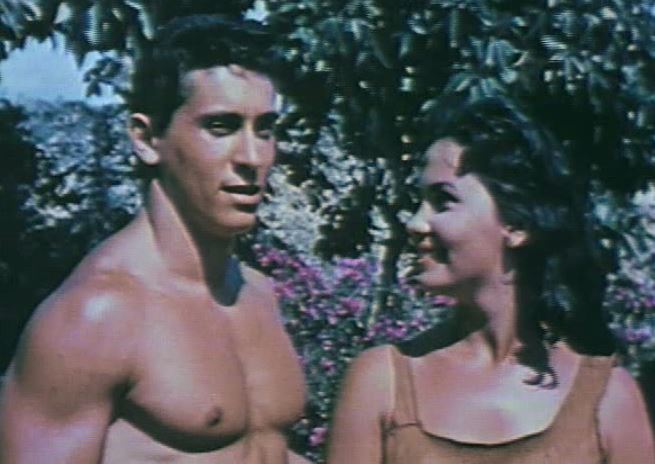 Kenneth Vitulli and Joyce Nizzari in THE WILD WOMEN OF WONGO

Playing one of the handsome men of Goona was Kenneth Vitulli, born May 2, 1938 in New York. His parents were William and Rosaria “Sadie” Vitulli. Kenneth had two brothers, Willam S. and Clark J.

Kenneth and his family moved from New York to Palm Beach, Florida in 1946 and Kenneth attended Central Junior High School where he received an award for making a score of 92 out of 120 in Latin. He was also proclaimed “Boy of the Month” around this time (1951).

At Palm Beach High School in West Palm Beach he was elected Junior Class President in 1955 and got his first taste of acting when he appeared on-stage in the school’s production of CAROUSEL in 1956. After graduation he attended college and was runner-up in a Mr. Florida contest. 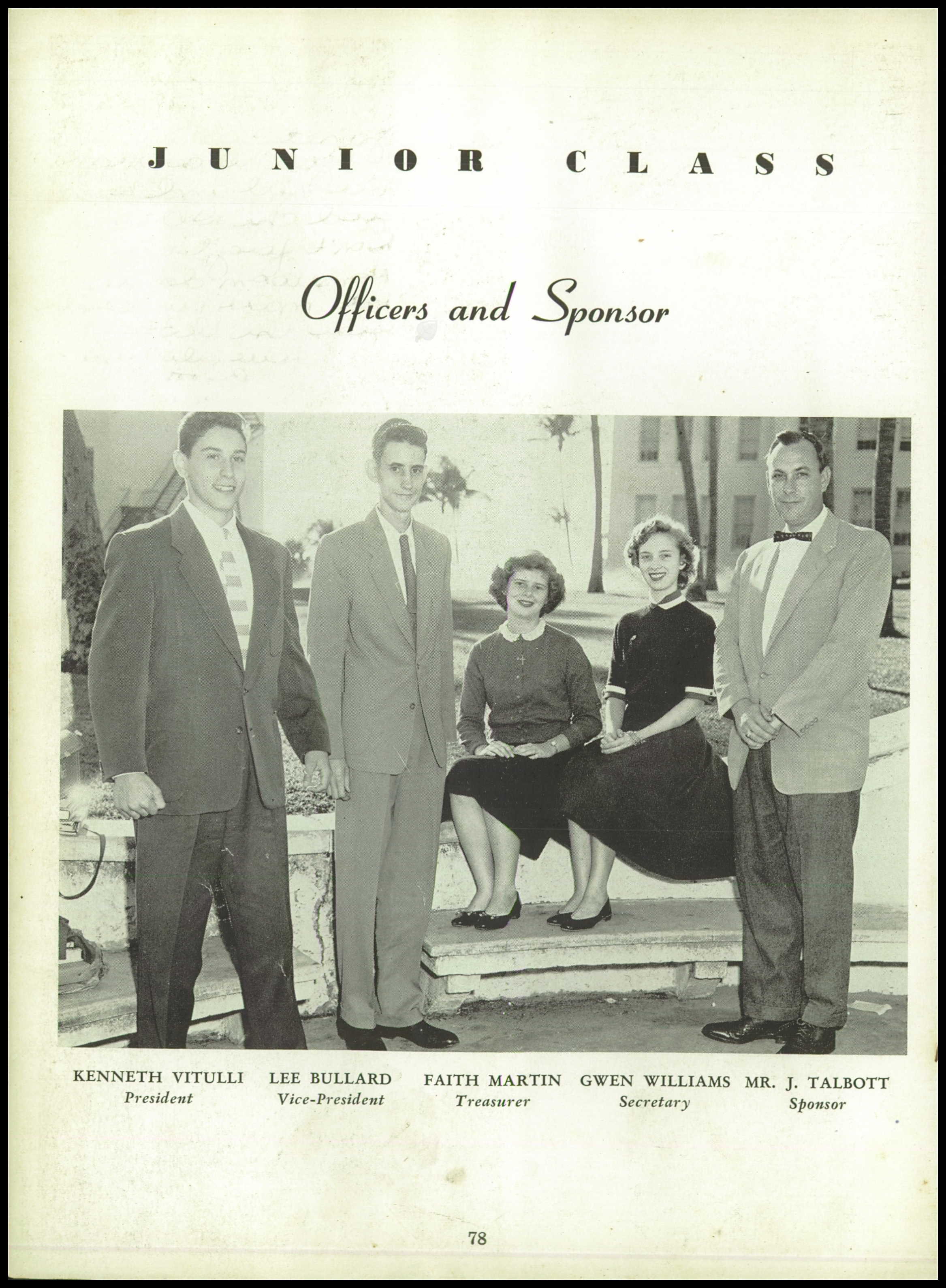 After appearing in THE WILD WOMEN OF WONGO Kenneth appeared in at least two plays at The Lake Worth Playhouse in Lake Worth, Florida: ROOM SERVICE (in 1958) and COME BACK LITTLE SHEBA (in 1959). He then joined Cincinnati’s professional theatre group, Playhouse in the Park in 1960 after having auditioned for them in New York. While appearing there he lived in the Mt. Adams section of Cincinnati with roommates Dave Collard and David Rosnbaum, fellow actors at the Playhouse. The three appeared together in the Playhouse’s 1960 production of DEATH OF A SALESMAN. Vitulli also played Lentulas opposite John Hillerman’s Caesar in the theatre’s version of ANDROCLES AND THE LION.

That same year he was interviewed by the Cincinnati Enquirer where he mentions working on his first film: “I was studying pre-dentistry in college when I had a chance to go professional. It was in a movie, only a Grade-Z thriller, ‘Wild Women of Wong’, made in Miami. But once I found I could get paid $90 a day for doing what I liked I forgot all about being a dentist.”

Additional quotes from the article:

“This is a perfect place for actors. Picturesque, old, sort of a Greenwich Village. Mt. Adams residents take actors in stride. They aren’t disturbed even when we wear sunglasses on wintry days.”

“I like opening night best. Later performances may be more polished, but excitement comes when reviewers are there and you are wondering how things will go.”

“It’s a great feeling to create a part. When you know you’re doing pretty well there’s nothing like it.  You’re a step above life.”

In the late 1980s Kenneth worked in the Home Improvement section of the Fort Lauderdale Sears while appearing occasionally as an actor on television shows like B.L. STYRKER and MIAMI VICE which were filmed in Florida. He later worked in the automobile industry.

Kenneth Vitulli (far right) in a scene from the TV show MIAMI VICE.

The Wild Women (and men) of wongo
Create a free website or blog at WordPress.com.